Roll over image to zoom in
Click to open expanded view

Although, WiFi has a lot of issues like range, lag, signal loss, and others. Because of this, all high-performance networking applications rely on an Ethernet connection. And in most cases, this Ethernet connection is handled over the highly popular RJ45 connector. But, if you are not familiar with it, then this guide regarding the RJ45 connector is just for you. You can find everything related to RJ45 by following this guide till the end.

If you are new to wired networking, then you are most probably unfamiliar with the different devices and connectors used in it. This also includes the RJ45 connector, which is primarily used for Ethernet connections between the various devices in any given wired network. An RJ45 connector is a highly popular physical connector used for networking applications that was primarily made for telephones.

The complete name of the RJ45 connector happens to be the RJ45 8P8C plug. This simply means that it has a total of eight positions and eight conductors. It is a modular connector for telecommunications and networking that can be adjusted as per your needs. As for its modern applications, it is primarily used for connecting computers to a LAN network. You can learn more about the RJ45 connector by going through the following factors one by one:

While we have already stated and explained some of the major importance of the RJ45 connector, some of you might be interested in knowing more about its name as well. RJ45 stands for registered jack 45, where the number 45 simply denotes the standard shape of this connector.

As for the registered jack part, it simply means that RJ45 is a physical standard used for network interfaces in all kinds of applications. Being a physical standard, it sets a standard for the wiring patterns used for the RJ45 connector. You can also find other RJ standard type connectors out there like RJ11, RJ14, RJ25, etc, where they all have different sizes and functions.

Even though RJ45 is used for all kinds of usage, its construction is quite simple as it has a limited number of parts. In any given Rj45 connector, you will find the following parts:

All of these parts are present on both sides of an ethernet cable with both of its RJ45 connectors.

As mentioned earlier, RJ45 is an 8P8C connector which is highly modular since it supports different cabling configuration. While you can make all kinds of possible combinations, the two highly popular ones include the CAT5 and CAT6 cables. These are also known as the T-568A and T-568B standards which use the same connectors but with different cabling as shown: 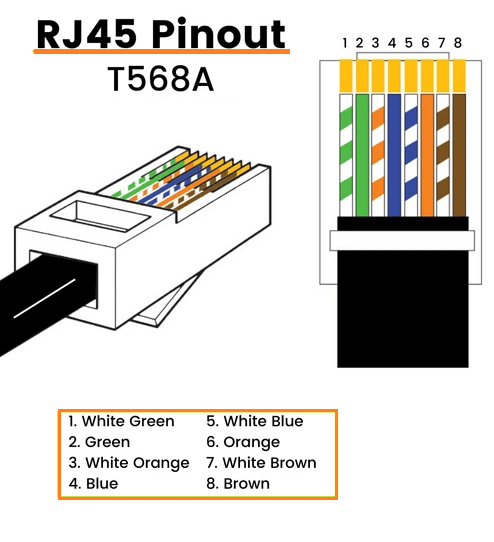 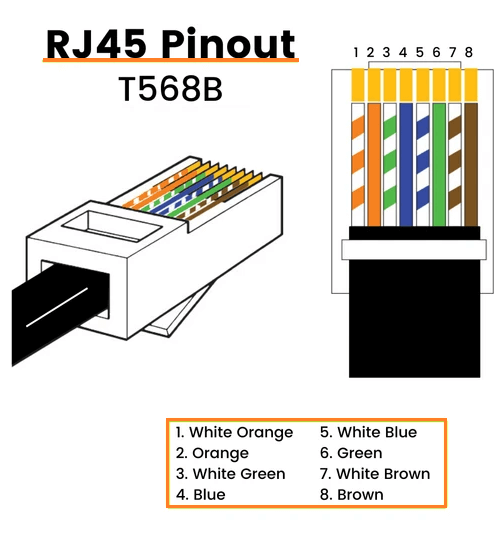 Whether you are connecting computers to each other to form a local area network, or you want your system to be connected to the internet, RJ45 allows you to do both of them. As for its original applications and why it was designed, RJ45 was primarily made to be used in telecommunication and telephone applications for connecting devices over a long distance for communication.

Be the first to review “RJ-45 Connector” Cancel reply

There are no reviews yet.